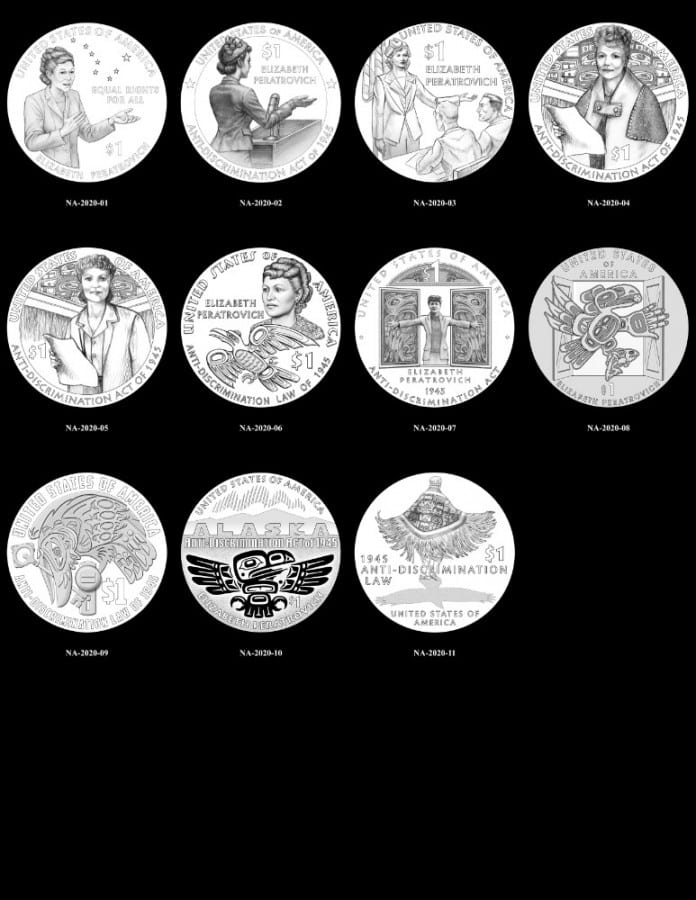 Alaska Native civil rights leader Elizabeth Peratrovich and Alaska’s Anti-Discrimination Law will be honored as part of the Native American $1 coin program, with a final design to be approved by the U.S. Treasury in 2020.

Public Law 110-82 authorizes the Secretary of the Treasury to mint and issue $1 coins with reverse designs bearing images celebrating the important developmental and historical contributions made by First Peoples to the nation.

“Elizabeth and Roy Peratrovich stood up to fight the unfair, inhumane and degrading treatment of Alaska Native peoples, and their efforts toward positive change reverberate to this day,” said Gov. Bill Walker, in announcing news of the coin on June 30. “Their words and actions continue to be an inspiration and reminder of the power that all people have to impact their government. This honor is truly deserved.”

In 1945, the Peratroviches testified in front of the Territorial Legislature, reminding lawmakers considering anti-discrimination legislation of the Bill of Rights, and the inherent equality of all people.

Discrimination was widespread at that time, with stores and businesses displaying “No Natives Allowed” signs.

Elizabeth Peratrovich was the last to testify on the Alaska Anti Discrimination. Witnesses said her passionate testimony ultimately led to the bill’s passage nearly 20 years before Congress passed the Civil Rights Act of 1964.

Elizabeth and Roy Peratrovich were deeply involved in their community, and served as grand presidents of the Alaska Native Sisterhood and Alaska Native Brotherhood respectively. They also helped the American Red Cross to raise funds during World War Two.

August 9 at 6:00 pm
Church of the Nazarene education building
Cordova