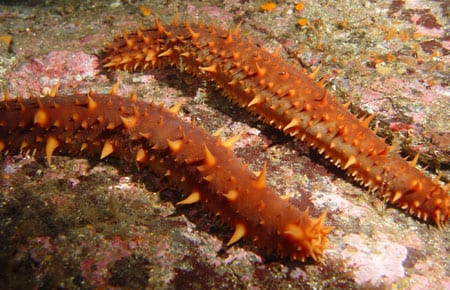 Editor’s note: Sea cucumbers and their extracts have gained much interest among researchers and nutritionists because of their nutritive value, potential health benefits and use in treatment of chronic inflammatory diseases. Further research is needed to consider their potential as candidates for prevention and treatment of cancers. Ty Bollinger is a certified public accountant who also engages in his own medical research.

Alaska sea cucumber divers could be helping to cure cancer!

Sea cucumber meat and skins have long been considered a delicacy in Asian cuisines; they also are hailed for having healing properties that soothe sore joints and arthritis. Most recently the soft, tubular bottom dwellers are being added to the list of foods acclaimed to kill cancer cells.

Dried sea cucumber or extract is anti-viral; anti-bacterial, and an anti-inflammatory, said Ty Bollinger, author of Cancer: Step Outside the Box.

“Sea cucumbers are very high in chondroitin sulfate, commonly used to treat joint pain and arthritis. To my knowledge, they have the highest concentrations of any animal,” he said in an interview, adding that scientists have been studying the echinoderms for more than 15 years.

“They have properties that are cytotoxic, meaning they kill cancer cells, and that also help stimulate your immune system. The sea cucumber does both,” Bollinger added.

The cuke extracts have demonstrated the ability to kill lung, breast, prostate, skin, colon, pancreatic and liver cancer cells, reports Ethan Evers, author of The Eden Prescription. Credit for clobbering the cancer cells goes to a special molecule called Frondoside A isolated from the sea cucumber by researchers at United Arab Emirates University.

In a 2013 PubMed.gov report, the researchers said Frondocide A was a “highly safe compound” that in lab tests significantly decreased the growth and migration of lung cancer cells. They said their findings identify it as “a promising novel therapeutic agent for lung cancer.”
While sea cucumber capsules, powders and liquids can be bought over the pharmacy counter, Bollinger said you won’t see cancer credentials on the packaging because the claims have not been verified by federal health agencies, A scan of online retail shelves shows a varied mix of products and sizes typically selling between $20 to $40. Alaska Wild Caught Sun Dried Red Sea Cucumbers are priced at $75 to $145 per pound. Cukes sold to the food market fetch $25 to $110 per pound.

There are nearly 1,700 species of sea cucumbers in the world’s oceans.  Starting October 1, up to 200 Alaska divers will be heading down for the red variety that thrives throughout Southeast waters. The animals, which can grow to 20 inches and weigh just over a pound, typically produce a harvest that tops one million pounds.

The divers usually get more than $4 a pound for cukes, making the fishery worth nearly $5 million at the docks. It could be worth far more but sea otters have devoured virtually every sea cucumber from the Panhandle’s most abundant bays in recent years

The Alaska Seafood Marketing Institute is holding its first video contest that showcases the fishing life.

“Scenery and fishing is great but we also want to see more footage from processors and other parts of the industry.  Alaska’s seafood industry may start in the ocean and on the boats, but it ends at the plate. It would be great to capture some of that in the videos,” said Jeremy Woodward, ASMI Communications Director.

Three winning videos up to five minutes long will be selected to be included in ASMI’s promotional programs around the globe. Cash prizes are $1,500; $1,000 and $500. Deadline to enter is September 30. Questions? Visit here or www.alaskaseafood.org/