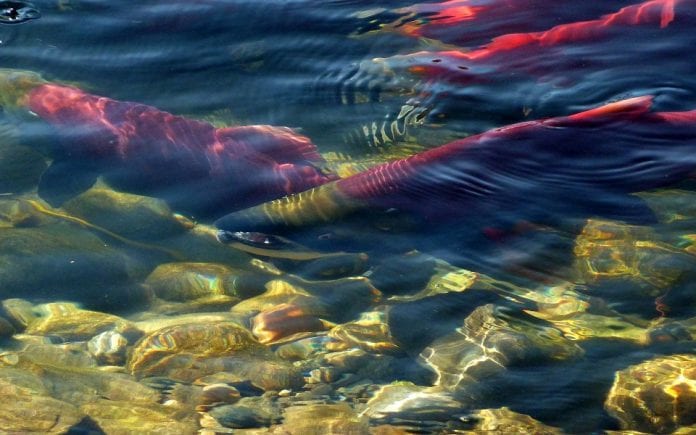 Alaska’s salmon season is nearly a wrap but fall remains as one of the fishing industry’s busiest times of the year.

For salmon, the catch of 213 million has surpassed the forecast by nine million fish. Highpoints for this season are a statewide sockeye catch topping 50 million for the tenth time in history (37 million from Bristol Bay), and one of the best chum harvests ever at more than 22 million fish.

The total 2017 salmon catches and values by Alaska region will be released by state fishery managers in November.

Hundreds of boats are now fishing for cod in Prince William Sound, Cook Inlet, Kodiak and throughout the Bering Sea.

Pollock fishing reopened to trawlers in the Gulf of Alaska on Aug. 25. More than 3 billion pounds of Pollock will be landed this year in Alaska’s Gulf and Bering Sea fisheries.  Fishing also is ongoing for Atka mackerel, perch, various flounders, rockfish and more.

Halibut are still crossing docks across the state, and Alaska longliners have taken 75 percent of the 18 million-pound catch limit. Most of the halibut catch (over 2.5 million pounds so far) is crossing the docks at Kodiak, followed by Seward. Homer, which bills itself as “the nation’s top halibut port,” is a distant third for landings.

The sablefish (black cod) catch is at nearly 70 percent of its 22.5 million-pound quota. Both the halibut and sablefish fisheries continue this year through Nov.7.

Crabbers are gearing up for the Oct. 1 start of the fall Dungeness fishery in Southeast Alaska, and mid-October crab openers in the Bering Sea. The dungy fishery should produce more than one million pounds; the catch quotas for red king crab, snow crab and (hopefully) Tanners will be released in a few weeks.

Shrimpers also will drop pots on Oct. 1 for nearly a half million pounds of big spot prawns from Southeast waters. Dive fisheries also open that same day for sea cucumbers, where a harvest of usually around one million pounds (“poke weight,” meaning drained) will be delivered over a few months. Smaller sea cucumber fisheries also occur at Kodiak, Chignik, the South Peninsula, Aleutian Islands and Bering Sea with a combined take of 185,000 pounds.

More Americans are aware of the health benefits of seafood, and they will pay more for fish from well managed sources, according to a survey by Cargill,  major provider of food and agriculture products.

Seventy two percent of more than 1,000 shoppers said they know fish is good for you; 88 percent said they are willing to reward good stewardship with their wallets. That figure rose to a whopping 93 percent of millennials.

Despite its popular pull, touting seafood sustainability has not transferred into U.S. restaurants. Market researcher Datassential reports that just 1.1 percent mention the word or a derivative on their menus, three times higher than in 2013. Other terms are more popular among diners – “wild” appears on 9.3 percent of seafood menus and “local” is mentioned on 4.6 percent.

The sustainability concept is getting a wider push from chefs who launched Smart Catch under the James Beard banner in Seattle two years ago and now includes nearly 300 restaurants. The program lets chefs key in information about seafood purchases and receive a good or bad rating based on data from the nonprofit FishChoice and Monterey Bay Aquarium’s Seafood Watch.

The Smart Catch program “is well-timed, with growing consumer interest in both eating seafood at restaurants and learning more about the provenance of their food,” said Bloomberg News.

“An increasing number of retailers and food service companies either have or are updating policies that include purchasing and selling sustainable seafood because consumers are increasing their demand for it,” said Jeremy Woodrow, communications director for the Alaska Seafood Marketing Institute.

Fish bits – Global fish trade is projected to hit an all-time high this year, boosted by an economic recovery of key European importers and high prices of popular fish such as salmon. Financial Times reports that the value of the world’s fish trade is expected to rise more than $150 billion this year as demand for salmon and shrimp increases, an increase of about 7 percent compared with 2016 and on course to eclipse the previous record of $149 billion in 2014.

The global aquaculture market is expected to continue growing at four to five per cent a year over the next decade and should exceed the 100 million- ton mark for the first time in 2025.