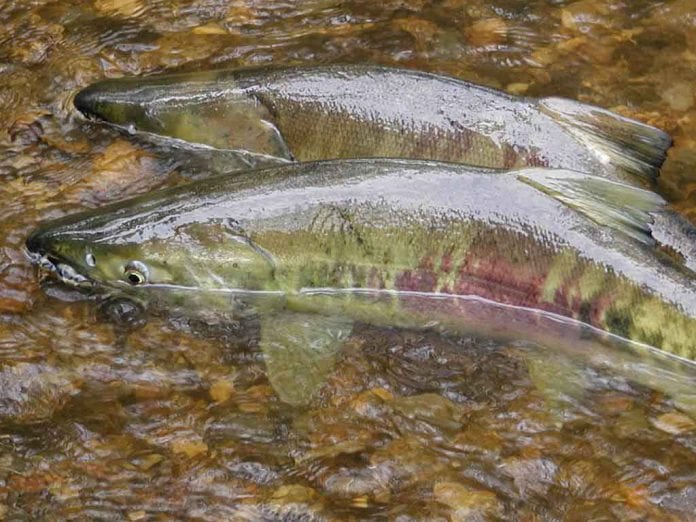 Chum salmon returned home to Alaska this year in numbers never seen before from Southeast to Kotzebue, and set catch records statewide and in many regions.

Chums, also called dogs because of their long use as a prime food source for Alaska Native dog teams, are the most widely distributed of all Pacific salmon and occur throughout Alaska. The fish usually comprise about 15 percent of the total salmon catch, and this year’s tally of almost 25 million is the biggest harvest since 2000.

At Kodiak, for example, a chum catch of nearly 2 million was 37 percent higher than usual and the highest take since 1995. Southeast Alaska’s chum catch topped 11 million, and at an average price of $.80 a pound, each fish was worth more than $7 to fishermen.

Chums also helped push Norton Sound salmon fishermen to a record $2.8 million pay day, the first time the dock value has topped $2 million. At Kotzebue, two buyers showed up for the first time in three years and flew off with a half million-pound chum salmon catch. And at the Yukon, fishermen harvested over one million chums for a fishery value of nearly $700,000.

“It’s a great year to have a record catch. The market for Alaska chums could not be better,” said Andy Wink, a fisheries economist with the McDowell Group.

“Some years you have a situation where there is not enough demand to soak up all that you produce and prices come down. We might see a little price affect because it’s a record year, but factors coming into this season were really supportive for chums,” he added.

Topmost, the harvest in Japan, one of the largest chum producers, was down 30 percent in a run of several years’ bad catches. There is no backlog of fish is in U.S. cold storages, and higher priced farmed salmon has buyers looking for other options. Wink said wild chum salmon from Alaska, often marketed with the more upscale name of “keta,” fits the bill.

“Those high farmed prices raised the bar for everything else and it gets more people interested in doing something with keta, and it also benefits from all the sockeye promotions,” he said, adding that several big supermarket chains are doing a “salmon series.”

“They will do promotions all season long and go from sockeye to chum to coho salmon,” he said. “That makes for a really nice progression.”

Chum roe is the most valuable of all salmon and Japan’s harvest shortfall will boost demand for Alaskan supply. Wholesale prices for all salmon roe skyrocketed during the first four months of this year, according to Alaska Department of Revenue data. For chum roe, the price averaged $20.03 per pound, up from $15.44 at the same time last year.

For the first time in four years, fresh halibut prices are taking a tumble with reports of some Alaska buyers turning away deliveries. The stall stems from buyers’ response to exorbitant prices over an extended period.

“We don’t even want it,” said a major Kodiak processor, adding that they are buying halibut only from longtime boats. Prices had dropped to the $5.70 to $6.10 per pound range, down from the more than $7 paid for several years running.

“Halibut is too expensive. Many restaurants have taken it off their menus and many retailers stopped carrying it a while ago for the same reason,” echoed another major buyer.

Not coincidentally, this year saw the highest opening wholesale prices on fresh halibut in four years at $9.25 per pound, compared to $8.10 last year and $8 the year before that, pointed out market expert John Sackton of Seafood.com.

“The Alaskan halibut market got ahead of itself this year, and as a result, major foodservice customers have been reacting to the high prices,” he said.

“Wholesale prices like that can push retail prices into the $30 a pound range for customers. Who in their right mind is going to pay that much for a pound of fish?” asserted Undercurrent News.

Alaska’s halibut catch limit this year is just over 18 million pounds. The fishery began in early March and this year ends on Nov. 7.

Letter to the Editor: Alaska deserves a fair cut of oil profits

Village of Kake: Tongass roadless decision is very sad for all Indigenous People in SE Alaska

Letter to the Editor: Stop cramming our mailboxes with campaign spam