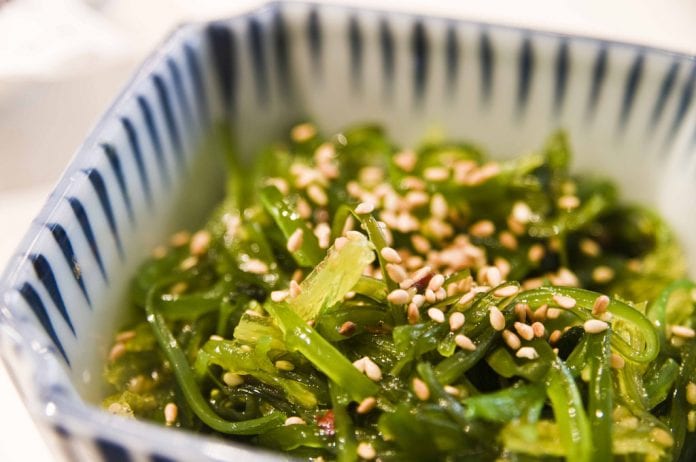 Research on improving the growth, harvest and transport of farmed sugar kelp at the University of Alaska Fairbanks is getting a financial boost with a $500,000 grant from the U.S. Department of Energy.

Leading the research project will be Michael Stekoll, a biochemist with a joint appointment at the UAF College of Fisheries and Ocean Sciences and the University of Alaska Southeast.

Stekoll is already at work on a $418,000 National Sea Grant College Program project to develop cost-effective cultivation methods so Alaska producers can grow and harvest commercial quantities of sugar kelp, a brown algae whose scientific name is Saccharina latissima.

The big challenge is that fresh kelp now being produced has a very short shelf life, so growers are looking at a dry product, but they also have to develop a market for this product in the foodie market, said Quentin Fong, a seafood marketing specialist with the Sea Grant Marine Advisory Program and professor with the University of Alaska Fairbanks College of Fisheries and Ocean Sciences’ Kodiak Seafood and Marine Science Center.

Fong said he will be looking into markets for Alaska’s farmed sugar kelp over the next two years.

“If it is not marketed correctly, there will be no market,” he said.

Fong noted that the Island Institute in Maine is engaged in research on the market potential for seaweed, as Maine has the potential to be a leader in U.S.-grown edible seaweed products.

The hope is to provide food manufacturers, retailers and commercial restaurants with concepts that inspire sale of food products featuring seaweed grown in Maine.

Many traditional supermarkets in the United States carry seaweed either dry in nori sheets in a form used for seaweed snacks, or in wet marinated form used in the sushi or deli case.

Researchers engaged in the project also identified a sampling of trend-setting fine dining restaurants in the United Kingdom, Spain, Ireland and the United States using sea vegetable in many forms, from broths to garnish.

Researchers said that the ongoing use of sea vegetables in London, Madrid and Dublin is helping to improve market acceptance, and that it appears that consumers are willing to try seaweed when the flavor is less fishy and more complementary.

“Perhaps the European market is a model of what we can expect for sea vegetable consumption in the near future here in the U.S.,” the report said.

Researchers also noted that seaweed consumption appears to be growing in Europe and has long been part of diets in Asia, while market acceptance I the U.S. is more limited.

The Island Institute’s summary report is online at http://www.islandinstitute.org/sites/default/files/Edible%20Seaweed%20Summary%20Report%209-15-17.pdf

Thanks to all for electronics recycling

As salmon abundance declines, the catch remains near all-time high