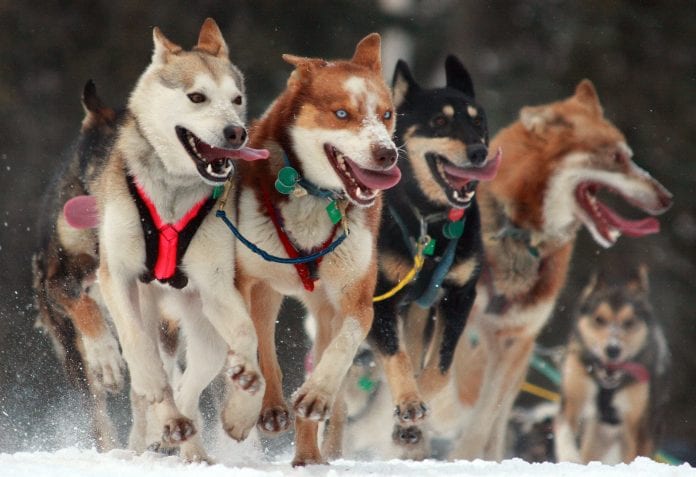 Note: This is a developing story and will be updated as new details emerge.

8:50 a.m.
Animal rights activists have gained their most powerful ammunition in their long fight against Alaska’s Iditarod Trail Sled Dog Race — a world class champion’s team caught with a banned substance in their systems in this year’s race.

PETA wasted no time responding to the news that several of four-time winner Dallas Seavey’s dogs tested positive for an opioid pain killer.

In a statement released Tuesday, the group asks “How many other mushers are turning to opioids in order to force dogs to push through the pain?”

It’s the latest blow for the world’s most famous sled dog race, which has seen the loss of major sponsors, continuing dog deaths and attacks on competitors in extreme rural parts of Alaska in the nearly 1,000 mile (1,609 kilometer) race.
___
10:20 p.m. Monday
The world’s most famous sled dog race was thrown into a frenzy Monday as the race’s governing board and one of its most decorated mushers were in open conflict over a dog-doping incident.

Dallas Seavey has won four titles in the nearly 1,000-mile race before his 30th birthday. But on Monday, he abruptly withdrew from next year’s race in protest after the Iditarod Trail Committee identified him as the musher who had several dog test positive for a banned substance.

Seavey adamantly denied the accusations, and he said he wouldn’t be thrown under the bus.

Four of his dogs tested positive for Tramadol, an opioid pain reliever, after finishing the race last March in Nome. Seavey was informed in April, and the committee said in a statement that after lengthy discussions with vets, race officials and Seavey, the board decided it could not prove intent.

ANCHORAGE — For the first time in the history of the world’s most famous sled dog race, several of the high-performance animals have tested positive for a prohibited drug. But race officials have refused to name the musher involved.

They estimate the drug could have been administered between 15 hours before the test and right before it.

Iditarod spokesman Chas St. George said in an email that the musher’s name is not being released based on an attorney’s advice. He said the musher also has not been named because of the unlikelihood that race organizers could prove the musher intentionally administered the drug.

St. George said the musher will be allowed to participate in next year’s race and will not face any disciplinary actions.

Iditarod board member and musher Aaron Burmeister said Wednesday he doesn’t know the musher’s identity. However, only the first 20 teams to reach Nome are tested, he noted.

Everyone seems guilty as long as the affected team remains unknown, said Burmeister, an Iditarod contender who sat out the past two races.

“It’s not a good situation,” he said Wednesday. “I’m hoping that we can turn a positive light on it and the musher steps forward.”

The Iditarod began testing sled dogs for prohibited substances in 1994. Dogs on all teams are subject to random testing between pre-race examinations and along the race trail.

Testing in Nome for top finishing teams, however, is not random but expected.

As a result of the positive test findings, the race rule dealing with canine drug use was revised earlier this month to hold mushers liable for any positive tests in future races unless they can prove the results occurred outside their control. Previously, the rule could be interpreted to require that race officials provide proof that a musher intended to administer the prohibited substance.

The doping is a hot topic among fellow mushers, Burmeister said. As to why a musher would give dogs prohibited drugs when testing is expected in Nome, there has been speculation that perhaps a competitor could have administered the drug. Mushers fly their team’s dog food to checkpoints along the trail up to two weeks in advance, and it sits there until mushers arrive at the checkpoint and use it.

But Burmeister isn’t buying that theory. “As a musher, why would another musher give their competitor a performance-enhancing drug?” he said.

Burmeister said several times in a phone interview that no other dogs have ever tested positive in the race.

“I just hope that people look at the big picture and realize that mushers out there are not doping their dogs,” he said. “This is an isolated incident.”