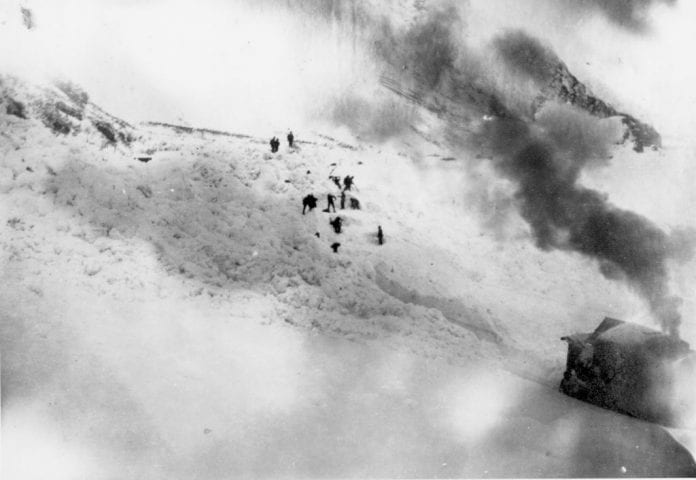 Winter proved frustrating, hazardous and even deadly for railroad workers building the Copper River and Northwestern Railway. Two days after this photo was taken another heavy slide buried Nathan H. Myers and Charles Doyle, two river steamer carpenters who had headed down the trail. A workman passing soon after reported the slide to the main camps and the absence of the two men was then noted.

The unfortunate men were found buried under tons of snow and ice. Hundreds of men searched for the bodies and were given much credit by company officials for being so persistent. Coffins were made at Camp 49 and the bodies were brought to town by train.

Many lives were lost during the building of the railroad as condition were less than favorable. Chief Engineer E.C. Hawkins commented, “It was the most amazing exhibition of loyalty, efficiency and endurance that I have ever known.”

Marion Foster Gilmore dedicated a poem to the intrepid men, a portion of which now follows:

“Strong for the strife that the floods awake,

And the Ice-King’s fury that nought can slake.

Well did ye work with a will sublime:

This memory is courtesy of the collection from the Cordova Historical Society held in the Museum.