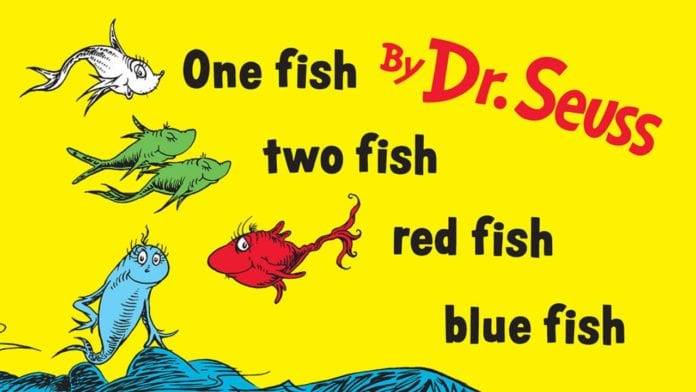 On March 2, we mark the birthday of beloved children’s author Theodore Geisel better known as Dr. Seuss. Many a child has grown up reading this author’s funny and mesmerizing books such as “One Fish, Two Fish, Red Fish, Blue Fish” or “Yertle the Turtle” or “Horton Hears A Who”.

Seuss had other pen names including Theo LeSieg, (Geisel spelled backwards!). He added the ‘Doctor’ to his pen name because his father had always wanted him to practice medicine!

His German surname Seuss is actually pronounced ‘zoice,’ as this little ditty composed by Alexander Laing, a Seuss collaborator explains:

You’re wrong as the deuce
And you shouldn’t rejoice
If you’re calling him Seuss.
He pronounces it Soice (or Zoice)

Dr. Seuss accepted this mispronunciation of his name because he thought it reflected a more advantageous name for a children’s author when your name rhymes with Mother Goose!

Geisel wrote most of his books in anapestic tetrameter – a poetic style used by many English literary poets. It’s often suggested this is one of the reasons that Geisel’s writing was so well-received.

And today the Great Yertle, that Marvelous he
Is King of the Mud. That is all he can see.

Celebrate this author’s birthday by visiting the library on Saturday, March 2 and read one of his many, many books!

The passing of a great author

How to cook your catch

Despite the snow, it’s springtime at the library

Books about the Exxon Valdez Oil Spill are prolific