From the fish camps of the Yukon and Kuskokwim Rivers, to the gillnets of Bristol Bay, to the bear and angler-packed banks of Juneau’s Sweetheart Creek, salmon connect people to the land, the water, the seasons, and each other. Those connections create a culture that inspired author Amy Gulick’s most recent book, “The Salmon Way: An Alaska State of Mind,” released on May 1.

“Salmon create a generosity of spirit, and generosity creates relationships,” Gulick said. “Relationships create community. When you step back you think ‘Wow, how can a mere fish do that?’ It’s the gift of salmon — not just to people, but to the land, the plants, the fish, the trees. They’re the gift that keeps on giving.”

“The Salmon Way” chronicles Alaskans’ relationship with salmon through six main sections, each one delving into a different theme: salmon as a gift, salmon as seen through the lens of commercial, sport or subsistence fishing, salmon in Bristol Bay, and the future of salmon. It weaves in profiles of salmon people, Gulick’s evolution as a salmon lover and stories of her journeys to fish camps, fishing boats, setnets, smokehouses and salmon-loving homes around Alaska.

Gulick’s first book, “Salmon in the Trees: Life in Alaska’s Tongass Rain Forest,” published in 2010, delved into the relationship between salmon and the Tongass’ trees.

For “The Salmon Way,” she asked almost everyone she spoke with the same question: What do salmon mean to you? 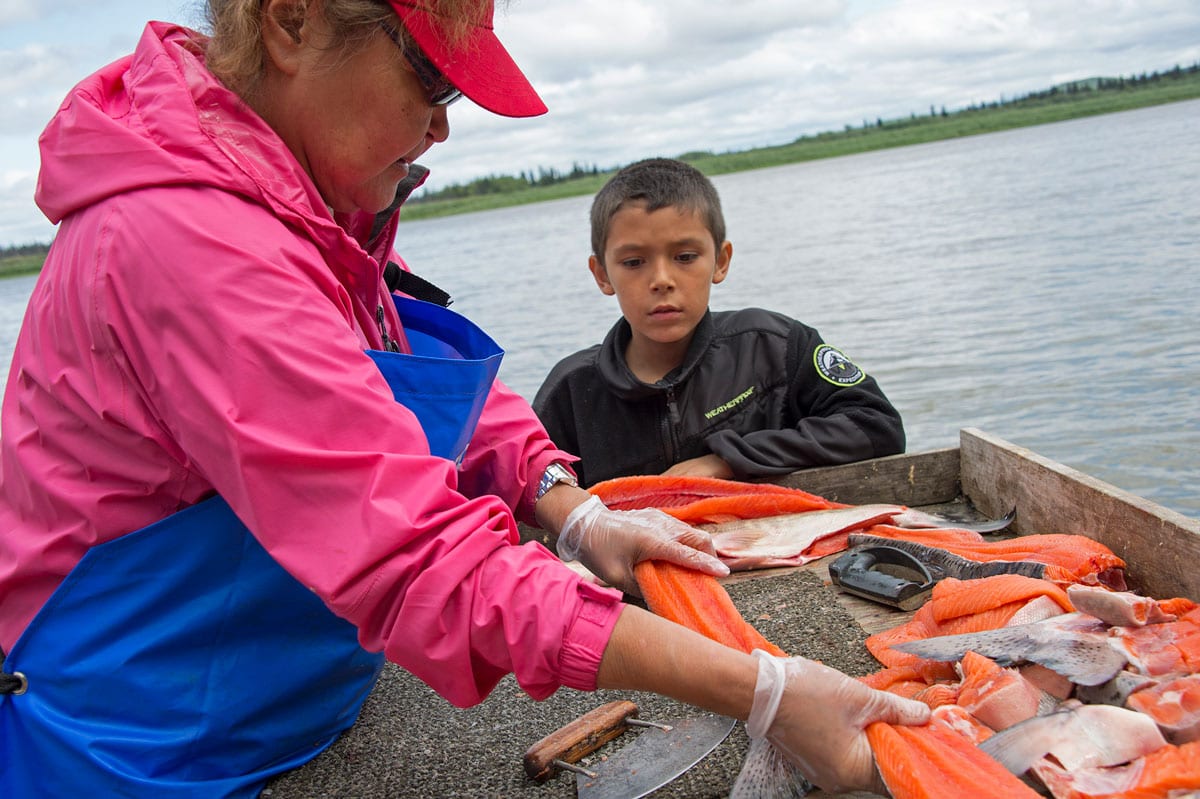 One woman told her salmon are “like breathing,” Gulick said. People to whom salmon provide different things — subsistence, sport, a paycheck — still answered similarly and in ways that went deep.

“If you blindfolded yourself and you listened to everybody’s answer, you would have no idea who those people were. You couldn’t label any of them. You couldn’t put them into a faction,” Gulick said.

That led to one of Gulick’s goals with the book: to help Alaskans see that when it comes to salmon, we have more similarities than differences.

“If we want a salmon-filled future,” Gulick said, “we need to be fighting for the fish and not over the fish.”

Every day in her home state of Washington, Gulick said, she’s confronted with what Alaska’s future could be. The state has spent and budgeted billions of dollars to restore its once-legendary salmon runs, depleted to less than 10 percent of their historical abundance due to what scientist David Montgomery, author of “King of Fish: The Thousand Year Run of Salmon,” identifies as the “Five H’s:” loss of habitat, overharvest, hydropower and dams, hatcheries, and people not learning from history.

Each time she traveled north to Alaska, Gulick said, the plane felt like a time machine.

“When I was flying north, I was hurled back in time to what my home was 200 years ago. And I’d just be so grateful,” she said. Going south, “… in a way I felt like I was being hurled into the future of what (Alaska) could be if we weren’t careful…. I always say the way that we lose salmon is gradual. We lose it stream by stream, river by river. It’s not overnight. It’s not apocalyptic. It’s a slow process, but in a few generations, they’re gone. And then enough time goes by, and we don’t even know what we’ve lost.”

Soon after a conversation with the late and renowned Tlingit Ravenstail weaver Teri Rofkar of Sitka, who tells her “relationships” is a better word to use for mountain goats and the Tongass’s trees than “resources,” Gulick writes, “There’s no doubt that salmon are valuable to Alaska, but when viewed in monetary terms, fish become commodities. So, what are salmon worth to Alaskans? Throughout my travels I asked everyone I met how he or she values salmon. Not a single person responded with financial figures. Instead, all of the answers spoke to the relationship instead of the resource. The most frequent responses included family, community, culture, well-being, and way of life — values too precious to reduce to dollars and cents, and senseless to try. The truth worth of salmon to Alaskans? Priceless.”