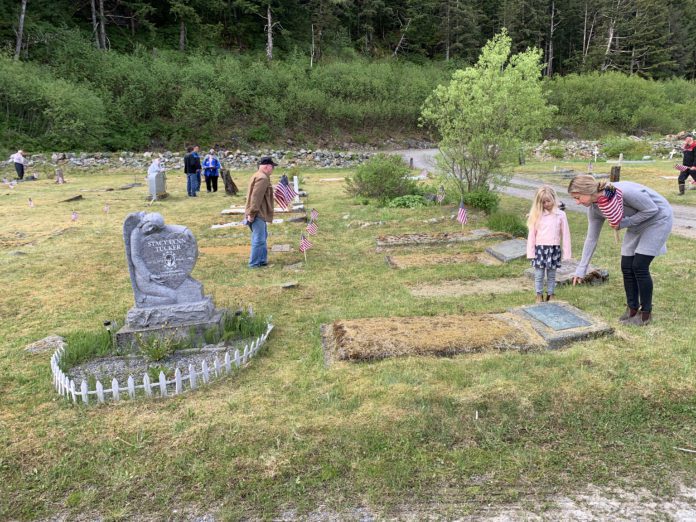 At 8 a.m., over 30 Cordovans gathered at the local cemetery in early morning sunshine to watch the stars and stripes hoisted to half-mast in honor of those who have given their lives while serving in our armed forces.

With help from her son Jacob, Wendy Ranney, leader of the Cordova VFW Auxiliary, raised the flag and asked those present to observe a minute of silence in tribute

As the flag fluttered in a gentle westerly, the group then dispersed to place small flags on the graves of more than 80 Cordova veterans who made the ultimate sacrifice.

“I have the greatest respect for those who have served and feel lessons about patriotism, flag and country are so important,” Ranney said. “This is our way to show we remember.”

As people wandered through the cemetery, the significance of the day was obvious in their hushed demeanor.

Several children were present, and their parents or grandparents quietly explained the meaning of the event.

Having recently been manicured, the cemetery was in immaculate condition. The only drawback was grass from weed-cutters covering many of the gravestones.

Ironically, this led to a closer inspection of those markers, as viewers brushed away the grass, and could be quietly heard uttering, “Why, I didn’t know he was in the military.”

Ranney had a map of the gravestones, which helped locate some whose markers were no longer recognizable.

Memorial Day dates back to just after the Civil War, when it was called “Decoration Day” to honor fallen soldiers from that bloody conflict.

It is now a national holiday observed on the last Monday in May and is also a day for many Americans that marks the unofficial start of summer. The Memorial Day weekend is traditionally one of the biggest travel days for vacation seekers across the country.

Around noon, I wandered back to the cemetery to say a private thank you to David Lape, a classmate from CHS Class of 1962, a helicopter pilot in Vietnam that did not come home.

I was surprised to see Wendy Ranney arriving to raise the flag back up to its full height.

“Many do not realize that under strict flag protocols, flags flown on Memorial Day are to be hoisted back up to the top at noon,” said Ranney, who had received this information from the VFW.

The wind had picked up, providing the opportunity to see the stars and stripes back at full height, with the red, white, and blue snapping in its full glory.

On a day to truly remember.

Something new is brewing at Copper River Brewery

Researchers predict SE Alaska will be a hotspot for ocean acidification