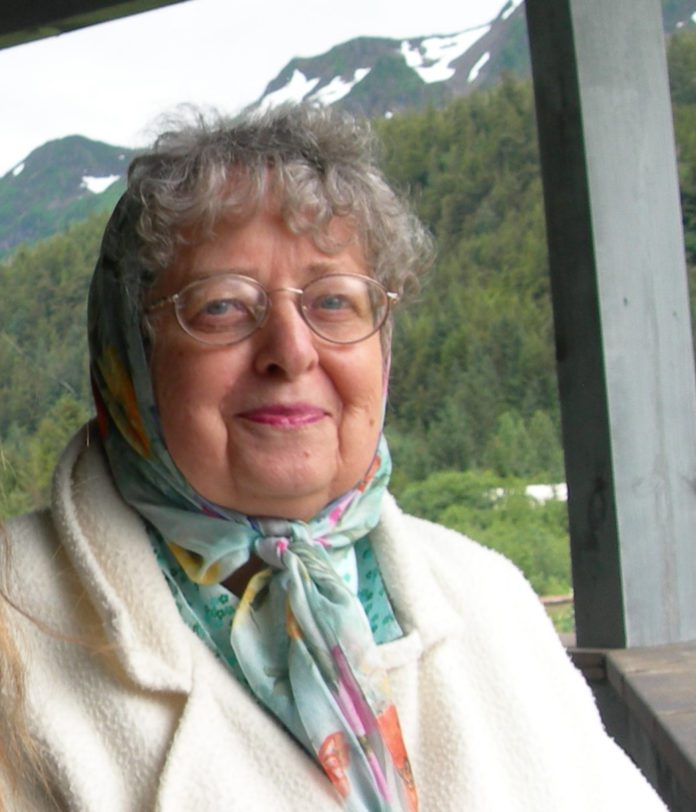 Katherine Barnes (Winn) joined her Heavenly Father on Sept. 11, 2022. She was with her daughter Anita and son-in-law Dana in Cordova, Alaska when she passed.

September 11 was National Grandparent’s Day, and on that day remnants of Hurricane Kay were hitting southern California where Katherine was born.

Katherine (Kay) was born on Sept. 16, 1930 in Los Angeles, California. Her mother died five days later, and she spent her first five years with her grandparents down the street from her father. He remarried when Kay was five, and she moved back in. Kay started playing piano as a fourth grader. She played piano in high school at a dance studio to earn money to pay for more advanced lessons. Her family moved to Mariposa near Yosemite in 1947 (her senior year) to a 200-acre goat ranch with no electricity, a 10-party crank phone and a wood burning stove to cook on. They had to go through five gates to get to their home and there were four miles of dirt road to get to the school bus stop. A huge change from Alhambra (L.A. area!), she fell in love with the beauty and wildness of the Winn-Oaks ranch and called it “The five gates to Heaven.”

A graduate of Mariposa High (1948), she worked hard as a paid musician for the school, a file clerk in the Mariposa Courthouse, a church musician, and a roving reporter for the Merced Sunstar until she finally saved enough money to go to Fresno State College to pursue her career as a nurse and meet “the love of her life” Fred Barnes, the star pole vaulter. After a year and a half of a demanding schedule, she abandoned her career because she couldn’t disassociate herself from her patient’s ailments. She decided to obtain a degree in elementary education and a minor in music, teaching second grade and later fourth grade in Mariposa County. She was also the district’s traveling music teacher, teaching at all the county schools, including the one-room-schoolhouse in Yosemite Valley.

She courted Fred, whom she met in college, while working as a substitute teacher in Yosemite Valley in 1953 and they were married in 1954. They moved to Fresno, California where they raised their two children. Family and friends were always gathered at the Barnes house. Kay loved people and entertaining them. The summers were spent camping in the western states with the children and the three dogs. Kay gave private piano lessons for most of her teaching career. She was an active member of the Fresno Music Teachers Association and ran big piano events in Fresno. She was an extremely creative teacher and thanks to 50+ years of Kay’s teaching efforts, countless (100s) of students learned a greater appreciation for music.

In 1984, Kay and Fred moved back to the mountains of Mariposa and plunged into the fascinating world of antiques. Kay ran Fabled Kottage Antiques and Collectibles and Kay’s Piano Studio for 25 years. She delighted local people and those from all over the world with her warm and welcoming shop, filled with antiques and collectibles and live music, as well as her enjoyment of life. The shop became a return visit magnet for people who made it a point to visit on the way to Yosemite. Kay gave lessons on a 100+ year old piano in the shop. A passerby stood in the hall one day and listened to Mrs. Barnes playing Bach for a student. “Kay poured her soul into her work, her shoulders gently moving with the melody, touching each key with painstaking thoroughness, caught up in the emotional experience of Johann Sebastion Bach. Mrs. Barnes was opening the realm of classical music to another young person.”

Bringing people and that particular antique together and bringing people and music together were two of her favorite hobbies. Other hobbies included drama, singing, writing, camping, cooking and gardening. Kay loved family visits with her children and grandchildren and made many trips to Clovis and Alaska to be with her family and get to know her grandchildren. They meant the world to her. She would play games for hours with the granddaughters and played duets on the piano with them.

Back in 1960, Kay and Fred were going to homestead in Alaska when they became pregnant with their first child and decided it was too difficult. Finally fulfilling that dream of living in Alaska, they moved to Cordova in 2015 to be with family in their final years. Cordovans welcomed them and gave them so much joy.

This was posted next to her piano where she taught music:

Why We Teach Music