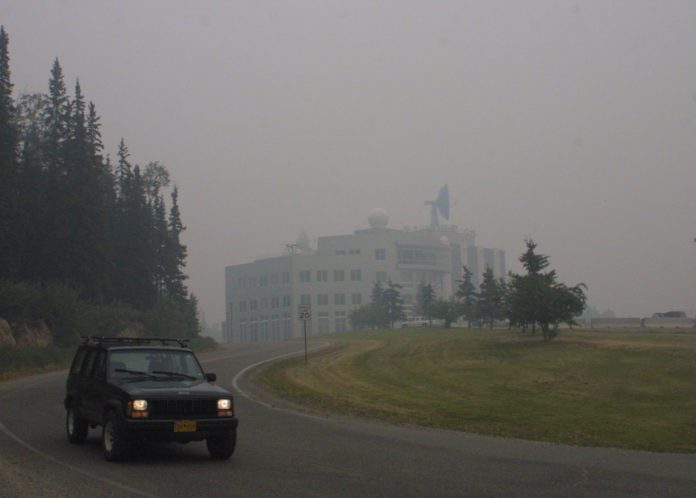 In a gorgeous warm May this year, we have not yet sniffed the bitter scent of flaming spruce. When we do, some of us will think back to a year that still haunts us.

In summer 2004, a Vermont-sized patch of Alaska burned in wildfires. That hazy summer was the most extreme fire year in the half century people have kept score.

Here’s how it happened

May 2004 was warmer than average in Interior Alaska, ground zero for Alaska’s fires for two reasons: Its summer heat and abundance of black spruce, which a firefighter once described as “gasoline on a stick.”

But that May was also wetter. Fairbanks received 2 inches of rain, more than three times normal.

The first hint of something unusual came May 31. On that day, the Alaska Lightning Detection System recorded 7,876 lightning strikes. Peppered from the Kobuk River to the upper Yukon, the lightning was the highest total ever recorded for a single day in May.

All that lightning meant thunderstorms. The rain that came with them perhaps hid some of the fires that started that day, wrote Michael Richmond, formerly of the National Weather Service Fairbanks, in a paper about that extraordinary summer.

June was a warm month throughout Alaska. For example: Kivalina registered a temperature of 96 degrees F on June 29. The normal high for Kivalina, way north of the Arctic Circle on the Chukchi Sea coast, is in the low 50s. Temperatures in the Interior were 6 to 10 degrees warmer than the June average.

In late June and early July came an unusual five days of dry winds wheezing from the Brooks Range and the uplands of the Yukon River. The fires, born of lightning strikes in May and June, “were fanned into conflagrations,” Richmond wrote.

Fairbanks was then in the soup. Giant fires burned in all compass directions. The sun was an orange disc you could look at without destroying your eyes. Visibility dropped to less than one quarter mile. People looked for areas on Alaska’s road system where they could escape for a smokeless weekend, with no luck. It was hot, but could have been hotter — the haze was so thick it scattered the sun’s rays.

“High temperatures were often 10 to 20 degrees (F) cooler than they would have been under clear sky conditions,” Richmond wrote.

And it didn’t end in July. August is usually a wet month in Interior Alaska, when a change in the jet stream shoves moisture from the southwest between the Alaska Range and Kuskokwim Mountains. That mechanism seemed broken in 2004. Fairbanks had its driest August in more than a century of records. It rained three-tenths of an inch on the first day of the month, but not a drop for the next 30 days.

Fires burned well into September that year. By the end of the 2004 fire season, 6.2 million acres of Alaska had burned. That broke the former Alaska record set in 1957, and not by a little. The 1 million more acres that burned in 2004 than in 1957 equates to a fire scar the size of Rhode Island.